We have been fortunate to have had 2 visits to what can only be described as Neolithic Heaven over the past 2 years, a truly remarkable and inspiring place, these shots barely scratch the surface of the number of Sites on the islands of Orkney – if you have an interest in (pre)history, then Orkney should be at the top of your list of places to visit! 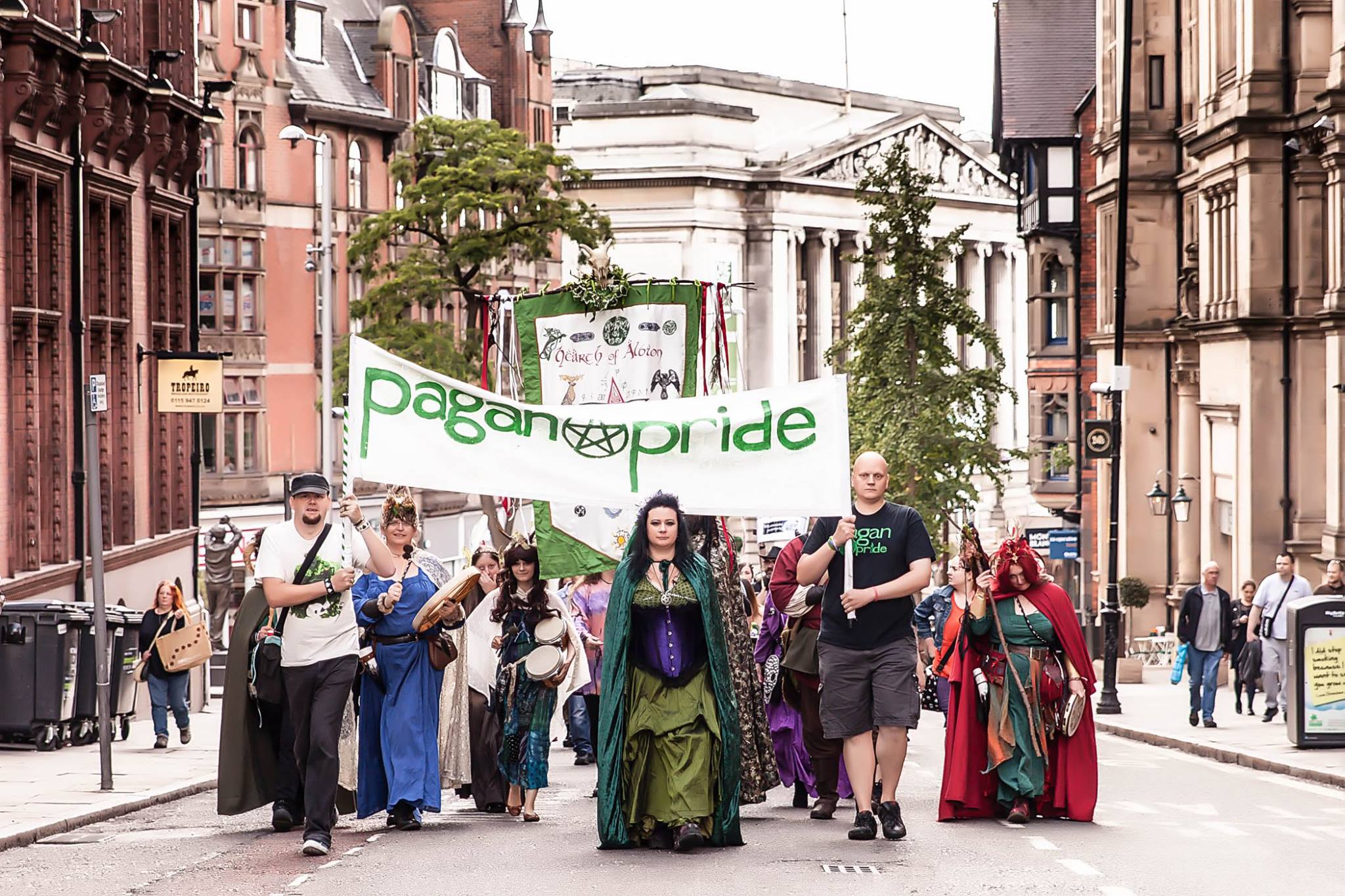 We were up at 6am for a cooked breakfast for the 6 of us who were able to attend, the cars packed under a grey and rainy sky in Manchester and we were then away on the 2 hour drive for 8am.

Arriving in Nottingham at the Forest Park and Ride it was to be greeted by a Raven who guided us into the perfect parking spot and then landed on the car in front to say hello. Once the 2nd car arrived it was time to out on all our finery and get the tram into Old Market Square to get ready for the parade! Thankfully the weather this side of the Pennines was not wet, and carried the promise of a beautiful sunny day – warm and dry! 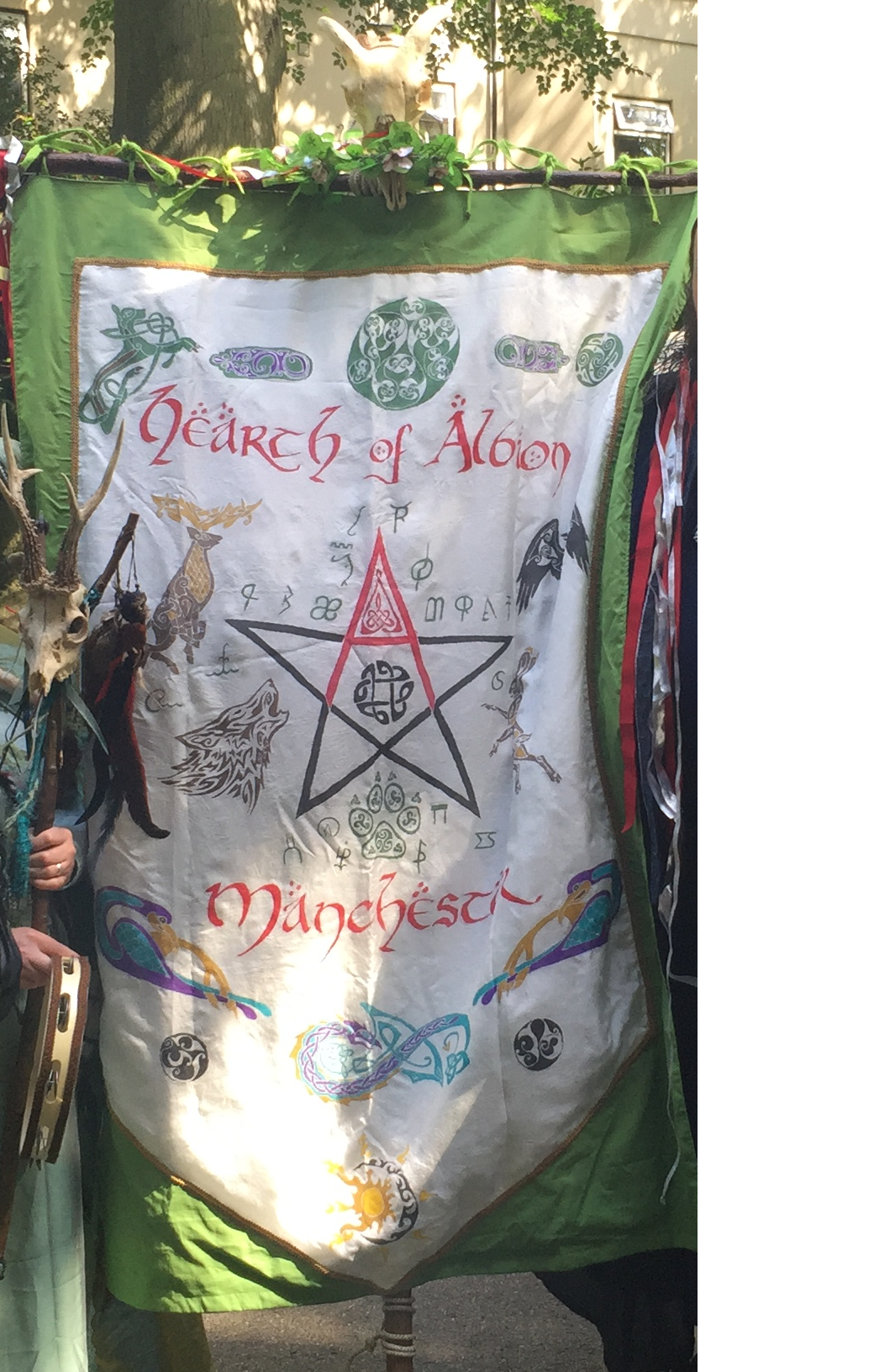 Once in the Market Square the Banner poles were lashed together, the 7′ Elder triple tined Stang surmounted with a 5′ Birch crosspiece, topped with a Rams Skull and ivy garland and crossed arrows mounted on the shaft behind the banner – hidden in plain sight! The Banner itself – gorgeous work by Caelia Mae – the Albion Sigil of a red A emblazoned onto a black pentacle, surrounded by Totem animals and sigils that have meaning to us, silk painting onto white silk, mounted onto green flag material and black backing!

Once the banner was set up and we were ready – drums and horns ready to play – we waited while the crowds assembled and Esme then told us to stay put – it seems we were to walk directly behind the Pagan Pride Banner and lead the Parade with her, an honour we were touched to have received!

As you can tell from the Video above , our drums and Hunting Horn were pout to good use – well, we were told to ‘Make some noise’ by Esme, so we were happy to oblige! The parade was the largest we have seen, and paused just before the underpass into the Arboretum while it reassembled prior to entering as one, last year the Parade took 3 minutes to enter the Arboretum, this year it was over 4 minutes! While waiting we managed to get a couple of pictures taken for our use, as well as having many pictures taken by others, it seems that Caelia Mae’s work is held in high esteem, she gave out a fair few business cards too!

Once the opening Blessing was given the Festival got underway proper, far too much to see and do in one day, ranging from great bands, a fab Pagan Shopping Parade and talks and demonstrations in the 7 venues spread across the Arboretum! Highlights for ourselves, Tony Rotheram’s excellent Robin Hood talk under the Greenman Tree, Phil Rose’s Robin of Sherwood recollections in the same venue and of course Shani Oates – the Maid of the Clan of Tubal Cain – ‘Sacred Mask, Sacred Dance’ talk in the Rose Garden, a talk I have wanted to hear since I first heard about it and one that delivered on many, many levels, getting a chance to talk with Shani afterwards was great, I hope to be able to meet her again soon and to talk more.

And to round the day off, Incubus Succubus playing live, what an amazing day!!

We hope that if you attended you had as memorable a Pagan Pride Day as we did, and if you didn’t attend, we hope that next year you are able to make it to Nottingham, a great free day out provided by a dedicated and hard working group of volunteers who out on a great festival! Wel done Esme and the Crew, many thanks to all involved in organising, volunteering, and helping in any way, and also to those performing, dancing, or giving talks!